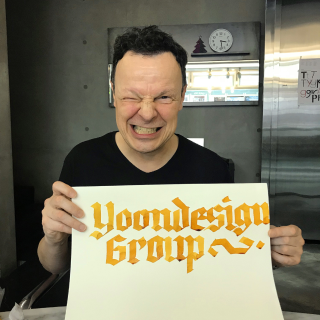 Joachim is an international designer, principal of Kame Design in San Francisco since 1997.

His typographic work in Latin and Kanji scripts has garnered the Gold Prize and two Judge’s Prizes from the Morisawa International Type Design Competition, as well as four Certificates of Excellence from "bukva:raz!", ATypI’s type design contest in collaboration with the UN. He was a member of the jury for Tokyo Type Directors Club 2010 Awards.

Joachim has taught, lectured and written for leading design publications in North America, Asia and Europe. Most recently he spent a 2-year term teaching type design and calligraphy at PaTI (Paju Typography Institute) in South Korea, and one year at Yoondesign in Seoul as Director of Latin Type Design.

His work has been reproduced in over 20 professional books worldwide. He graduated with honors from the Basel School of Design in Switzerland, and added fine arts studies at the Cooper Union, New York.